Drinks at The Shard

Hey guys, from now on Mimi will be collaborating with me on the blog, so we will both be posting and signing with our respective names. Introductions will be made later and the blog improved, but here is Mimi’s first post. We also have created a Facebook page, please go ahead and like it!

Having had a heavy night on Friday – I didn’t have much energy left in me on Saturday. I didn’t think I could bare another evening of crazy shenanigans!

Although having been Invited by Stella, I just couldn’t resist not going to have a nosy at the Shard, where it’s known for its amazing view of London, in all its glory. Besides I still had an article to write after not being able to do my planned lunch. (a funny story for another day)

I would usually take an uber if I’m planning to go out late – but seeing as it’s so conveniently close to London Bridge station – I took the train. So that’s a good start – it’s easy to get to and won’t kill your feet, for those ladies in heels!

As I was walking towards the shard it’s impressive height was breathtaking! It’s like a massive Christmas tree with all the lights! As I walked in, it kind of reminded me of when I went to Martinez in Cannes. Nice cars and friendly doormen.

When I got to the elevator, a rather handsome man was also waiting. Which funny enough turned out to be the guy who helped build the shard!! How cool is that?!! No – I didn’t take his number as some girl walked in at the last minute as the elevator was closing – so I was unable to work my sexy charm!!

The bar and resto can be found on the 31st floor which I soon found out was separated by two different bars Aqua and Oblix. It all felt quite posh but not pretentious. There were all sorts of people in both bars and by that I mean, men dressed as women too. It was great! This was MY kind of scene… Light music, dark settings and great vibe. As you walk into Aqua, you are greeted by large windows that are about 3 floors high and can immediately see London City. It was amazing!!

Unfortunately, Aqua doesn’t take bookings for tables, so if you plan on wanting a sit down, I suggest you arrive early enough to get one! Whilst waiting for the girls, I decided to check out the toilets, as I’ve been told before that you can tell a lot about a place by its toilets – although having seen the settings – I couldn’t have cared less….that is until I got to the toilet!!

The women’s toilet had loads of mirrors from wall to wall, still with views of London. Unfortunately, they only had 2 toilets and hardly any light to see yourself! What were they thinking??! You had a great place, with good capacity for people and yet you only had two toilets and a dark room! So make sure you bring a flashlight if you visit. You will be needing it!

Finally the girls arrived and since we were unable to get a table, we decided to check out Oblix. This place had a different setting. You walk through a hallway, which felt as if you were walking through a pyramid tunnel. A little creepy, but pretty cool! As you reach the end of the hallway and into the main room – you had a slightly different atmosphere. It was more quiet and relaxed. The age group there felt more older. Probably people in their 30s and above. It is an ideal setting for romantic nights with a special someone. So for all the men reading this, you will be guaranteed to get brownie points, just by taking your lady here.

Having found a table we all sat down by the window over looking the river Thames and London Bridge. I mean the views were just extraordinary!! It was like being an angel in heaven! 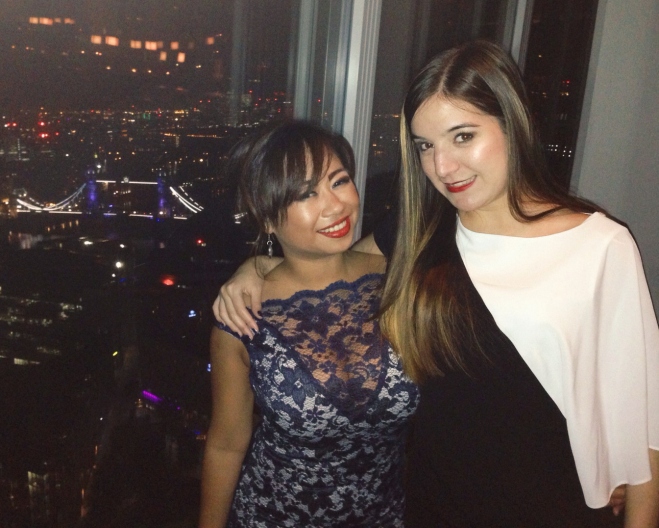 Stella and I, I’m wearing a Lipsy dress while Stella is wearing a Zara one

This photo sums up our friendship

The service was slightly disappointing though. Not what I had expected from a place such as this – especially at what they were charging for drinks!! Cocktails were about £15 and above. Glasses of wine ranged from £8 above. Hard liquor £100+ and bottles of wine were £26+ and that didn’t include a service charge.

It’s not cheap if you plan to go on your own or take a date! Although, I would suggest that you go with a group of people and share a decent bottle of wine – more value for your money.

As we got there rather late, we didn’t have much time as it closed at 1 am. I was slightly annoyed as, as soon as it hit closing time, we were being rushed to drink our wines! I mean come on – we had to chug that – I was so tipsy by the time I got to the elevator!

Girls with a view, quick, quick, down your drinks!

All in all, I would highly recommend to visit this place, even if it’s just for one drink. It’s worth it! There is no door entry fee, no minimum spend, no coat charge, and a good atmosphere. I suggest you arrive earlier than 11pm if you plan stay longer. However if it’s a flying visit or want to end a great date/evening – then by all means arrive about that time when it’s less busy.

I didn’t get to try the food. Has anyone dined here? If so, would love hear about it, as I’m a big foodie!

What was your experience?

4 thoughts on “Drinks at The Shard”

Just making sure the éclair is legit 😅. #wolse

Always be extra, on a Thursday! @atyourbeatstudio